skip to main | skip to sidebar

I have decided that if I post small little blurbs (instead of waiting until something really exciting happens) maybe more things will be put up on here. So today as I was doing the laundry I made a sad (and somewhat embarassing) discovery. I have a shirt that I have had and worn since high school. Yes, you read that right. Since high school. I probably got it going into my Junior year. So that you dont have to rack your brain figuring out how long ago that was; I will tell you. Fourteen years ago!

So the sad thing that I discovered is that this shirt finally has a spot on it that looks worn out and I feel that I must part with it. But I am just amazed that it has lasted so long; because I wear this shirt pretty often. It is soft and comfy and does not look too out of style (I hope). It is just a blue and white striped tshirt style shirt. I have never had an article of clothing this long. So I am putting a plug in for Jones New York clothes. They will stand the test of time.

Good-bye old comfy shirt. I will miss you.
Posted by Tara at 9:50 PM 3 comments

Carter, Kyler (their cousin) and Jackson at the children's museum 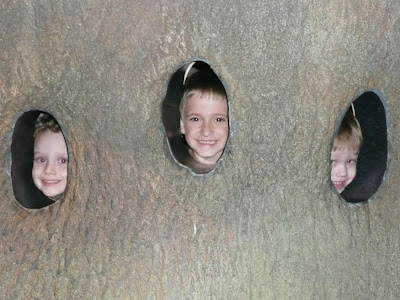 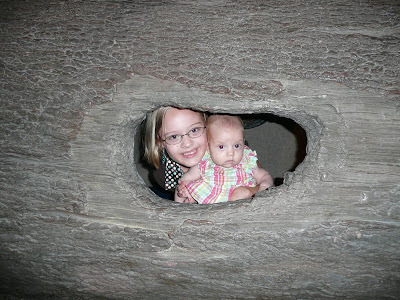 Carter during his birthday party at Sarah's. Notice the movie is upside down. 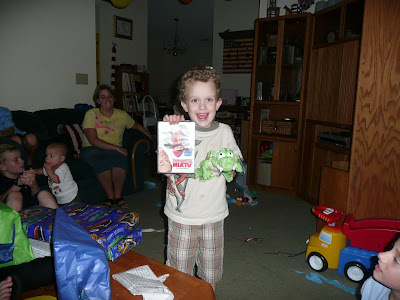 Carter ready to blow out the candles on his backward cupcakes. We sang backwards too. 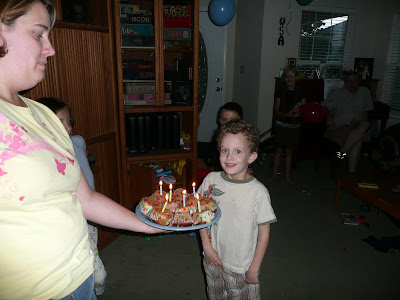 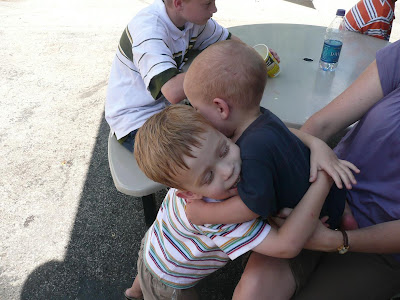 Grace catching some z's at the zoo 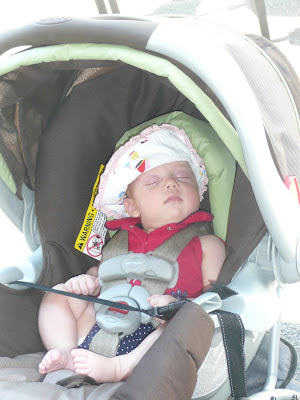 All the children at home on the couch. Jackson's cheesing, and Carter's looking elsewhere, but Grace looked cute in this picture, so I wanted to post it. A little half-smile. 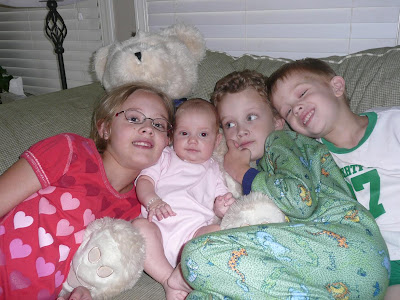 Well the month of July is almost over and it's been an interesting one for me. This is first full week of the month that I'm going to be in the office, and it's the last week of the month. The first week of the month I went to Utah for a team meeting with my group at work. When we get together for a team meeting there is a bit of work and play, but the work even, is just meetings and conversation, so it's kind of like a "Vacation" from the norm. Plus, I got to play 27 holes of golf that week, including 18 holes on my favorite course ever, Hobble Creek in Springville, UT. Then we played the newer "Mountain 9" at Cascade. That was a crazy course. Then it was the 4th of July weekend, then the next week, I was in the office for Mon-Tuesday and we left on Wednesday to drive up to Indiana for a week-long visit with my sisters Stephanie and Sarah and their families.

That was the actual vacation. It was a lot of fun. The children did really well on the 500 mile drive each way and we had a ton of fun while there. We we able to go to the children's museum, which was awesome. It's about 10 times as big as the one here in Atlanta, and much, much nicer. We also went to the zoo and it too, was much nicer than Zoo Atlanta. Sorry Atlanta, but you really need to pick it up on the family attractions! Tara and I were able to have a night getaway with just the baby which was nice, a little late 10 yr anniversary celebration. I was able to play another 18 holes of golf with my brother-in-law Chris and two of my nephews. That was a lot of fun.

On Carter's birthday, we had a cookout and my sister Sarah threw Carter a backwards birthday party. The streamers were on the floor and the balloons hanging from the ceiling, and everyone was wearing their shirts backwards. The cakes were upside-down cupcakes. It was very well done. Thanks again Sarah! We had an adult night out, and plenty of other time together as a family. Including pizza and bottle rockets the evening before we left. It was a lot of fun visiting with Sarah, Steph and their families. The children were all a lot of fun and great to spend time with everyone. I can't believe how big everyone is getting.

We got back on a Tuesday night and I was in the office for 3 days that week, then last Monday I left for a Mon-Thursday trip to Philadelphia to a client. Typically for me, a trip means I'm at the end of a project, so the time leading up to the trip is crunch-time and while I'm travelling, I'm testing and wrapping up code, and in the evenings while at a client site, I'm working to fix something so that it's corrected for the next day as we run into issues. This trip was just some assistance and training about some things that were already in place, so it was a very relaxing trip with a client that is very easy to work with, so it was another "Vacation". So it was 4 weeks with a total of 6 days in the office. Pretty nice for me. Of course, my two "Vacations" weren't such for Tara. When I was in Utah, the children definitely could have been better, but they went to bed and were much better for her last week. Can't believe we're almost in August already, school starts in less than 2 weeks for us, and this August is 4 years for me at this current position at work, and is my 10 year anniversary with LexisNexis. Crazy! Well, I'm going to post some pictures, but not part of this post, in a separate post. Also, got a new quote I've been meaning to add from Jackson, check it out.
Posted by Mark at 7:53 PM 2 comments

Well, if you have been reading our blog from the beginning you will remember that we have an owl that lives in the trees around our house. We find him very interesting, but when we found that he had killed one of the wild bunnies that live around us we were not really happy. We also assumed that he was the reason we had not seen any of the little chipmunks roaming around our back yard this spring. 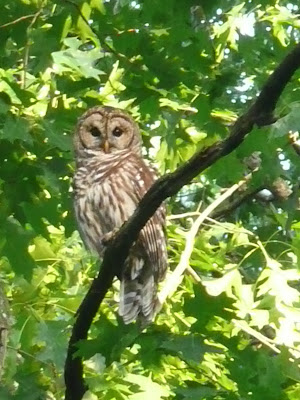 So the other day Mark found the remains of an opposum in the back yard. We are more than happy for the owl to eat animals like this. When Mark shoveled it up to bury it he realized that it was just the skin of the end part of the possum. 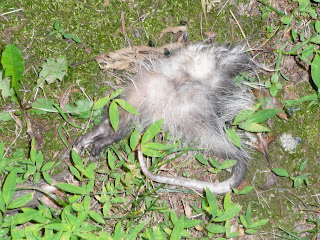 We assumed that the owl ate everything else and left that part. Then we found this gross ball of stuff on the deck; which if you watch Dirty Jobs you might know what it is. 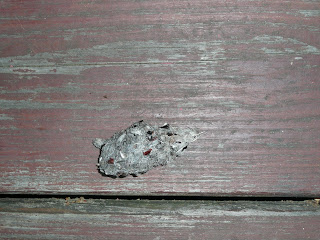 If you dont watch this show then you can go to this link and find out what the mysterious object is. (Or if you are like me and just want to watch Mike Rowe in action you can watch too.)

A little about us...

Tara is the stay at home Mom of four cute kids. She started this blog in an attempt to keep some kind of history of their lives. Baby books and scrap books have not worked out so well for her. Tara loves to look back at scrapbooks and see how everyone changes and grows, but she cannot seem to keep them updated. Hopefully this will make it easier for her.

Mark is a Software Engineer in the Consulting group at HotDocs Corporation. He works at home with some occasional travel. Mark enjoys sports, especially playing basketball and tennis, although he enjoys a good level of mediocrity at both. He also enjoys music, reading and spending time with the family.